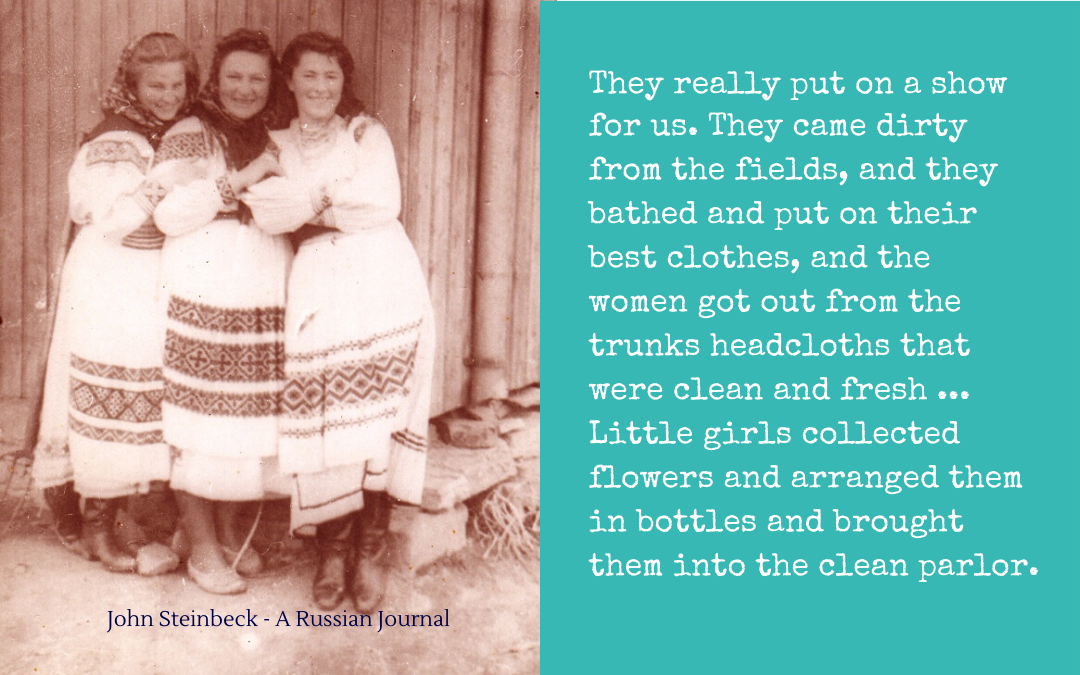 Steinbeck describes the warmth and generosity of the welcome he and Robert Capa received in Ukraine, during their month long trip to the Soviet Union in 1946. The entire village was party to the plan, and contributed what they could. This was a great show of hospitality, but not an isolated one. The two foreigners were overfed and lavishly cared for by their hosts, particularly in Ukraine.

‘They really put on a show for us. They came dirty from the fields, and they bathed and put on their best clothes, and the women got out from the trunks headcloths that were clean and fresh. They washed their feet and put on boots, and they put on freshly laundered skirts and blouses.  Little girls collected flowers and arranged them in bottles and brought them into the clean parlor. And delegations of children from other houses came in with water glasses, and plates, and spoons. One woman brought a jar of her special pickles, and the vodka bottles from all over the village were contributed. And a man brought a bottle of Georgian champagne, saved for heaven knows what great occasion.

In the kitchen the women put on a show too.  The fire roared in the new white oven, and the flat cakes of good rye bread were baking, and the eggs were frying, and the borscht bubbling.  Outside the rain poured down, so we didn’t feel bad, for we were not interfering with their work in harvest time, they couldn’t have been working with the rain anyway … A number of men came into the parlor, and they were neatly dressed, and cleaned, and washed, and they had shaved and they had on their boots. In the fields they didn’t wear boots.