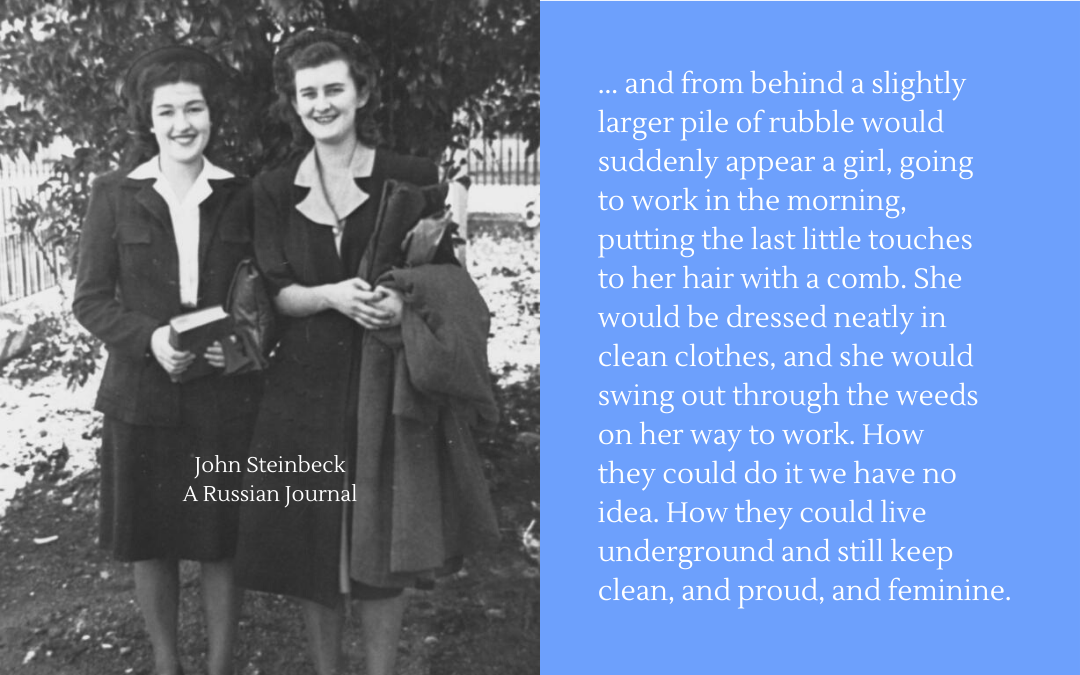 During their month long trip to the Soviet Union after the Second World War (and during the Cold one), John Steinbeck and Robert Capa spent a few days in the bombed out siege-opolis of Stalingrad, where they found human scenes, some startling in their extremity and some in their astonishing normality.

Here they spot women stepping out of rubble-rimmed cellars, clean, proud and feminine, getting themselves ready to go to work or to the market. Their trim resilience in the aftermath of war is breath-taking and humbling.

‘Stalingrad was a large city, and it had had apartment houses and many flats, and now has none except the new ones on the outskirts, and its population has to live some place. It lives in the cellars of the buildings where the apartments once were. We would watch out of the windows of our room, and from behind a slightly larger pile of rubble would suddenly appear a girl, going to work in the morning, putting the last little touches to her hair with a comb. She would be dressed neatly in clean clothes, and she would swing out through the weeds on her way to work. How they could do it we have no idea. How they could live underground and still keep clean, and proud, and feminine. Housewives came out of other holes and went away to market, their heads covered with white headcloths, and market baskets on their arms. It was a strange and heroic travesty on modern living.’

See another example of resilience in post-war Stalingrad, in this case a touching scene of tenderness and dignity in grief.

Photo credit: John Oxley Library, State Library of Queensland.  Two women dressed for work, 1940-1950; woman on the right is Noela Coleman and the other is Dorothy Warfield.