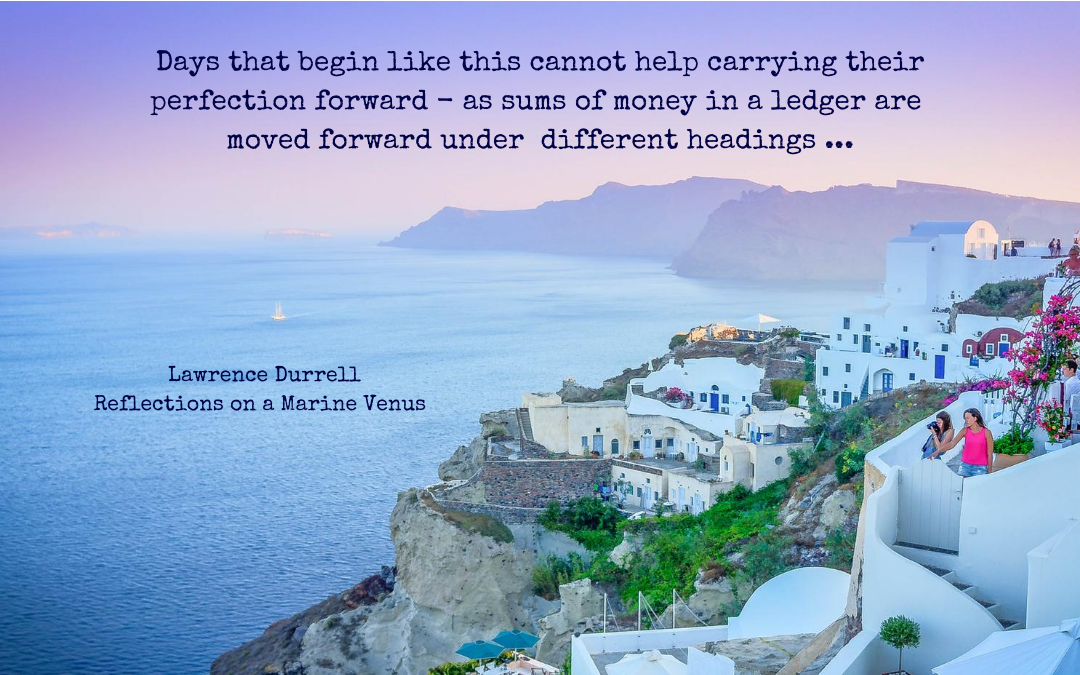 Being a madrugadista, I love descriptions of the magic hours of daylight before the world is up and about.  It sets me up for the day if I wake by dawn in summer, around five in June but by now, mid-August, already slipping well into six o’clock.  As I see the night inking its way into both ends of the day, I treasure these luminous moments all the more.

And there is a lovely stretch of months when it is usually cool enough in the morning – but not too cool – to take coffee outside and put in a few hours of personal study.

Early in the season this is also enlivened by the outrageously loud and joyous song competition among the male blackbirds, each choosing a high point on a roof, chimney or tree top, from which to broadcast their melody.

So, I loved these accounts by Durrell of early mornings in Rhodes in the 1940s, including his comment on the way such a start can put you in good shape for the rest of the day, carried over into the column of later hours like a book-keeping credit.

At six these early summer morning I rise and cross the garden barefoot to wake E by throwing a pebble at her shuttered window; and together we bathe in the cold sea before breakfast …

Often Hoyle drops in from the hotel across the way, and all four of us settle down to breakfast in that sunny coolness.  Days that begin like this cannot help carrying their perfection forward – as sums of money in a ledger are moved forward under different headings – to lighten the office-work … Idle conversations leading nowhere except perhaps to the confirmation of a happiness as idle as this shadowy garden, with its heavy odours of flowers, coffee, and tobacco-smoke, mingled with early sunlight.