The long sense of possibility 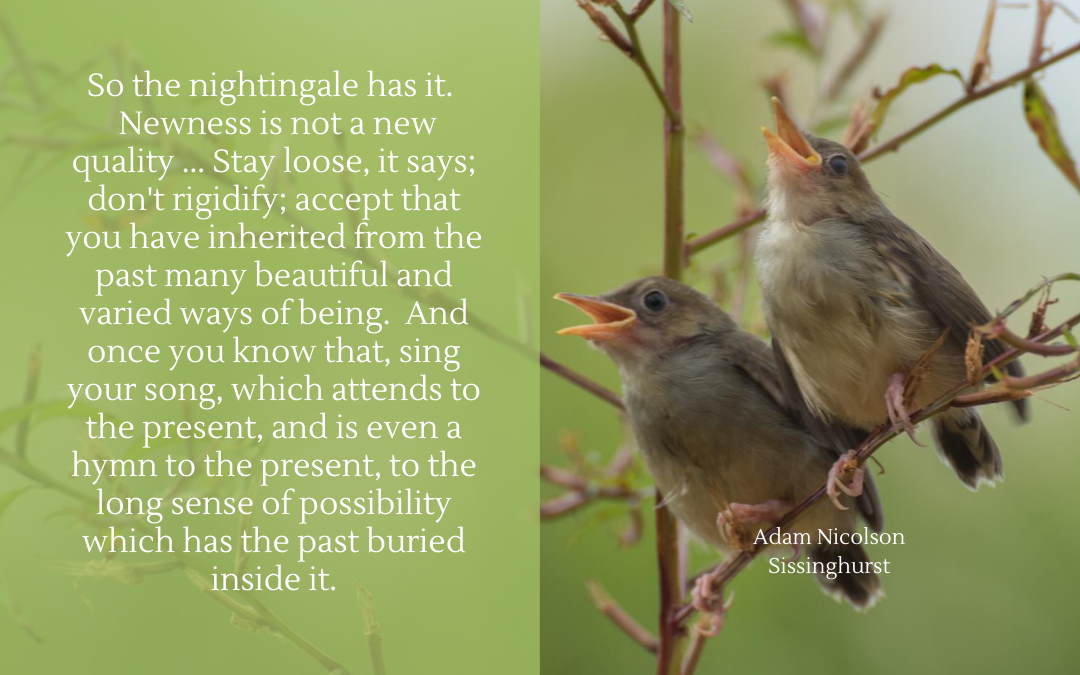 Insights into creativity and innovation in the song of the nightingale – I particularly like how he draws on what he already knows, as we can draw on our past, both personal and collective, to forge the new.  And ‘gurgle-beauty’, what a lovely notion!

Every snatch of its song was unfinished, an experiment in gurgle-beauty.  You wanted him to go on but he didn’t, always stopping when the song was half-made.  We listened, standing in the warm wind, waiting for the next raid on inventiveness.  Every part of that bird’s mind was restless, on and on, never settling on a known formula, an unending, self-renewing addiction to the new, to another way of doing it, and then another, all in the service of a listening mate and the survival of genes.  That is the nightingale’s irony: his brilliantly variable song is indistinguishable from his father’s or his son’s.  Invention is nothing but the badge of his race.  It is as if new and old in him were indistinguishable.  That is the nightingale lesson: inventing the new is his form of repeating the past …

So the nightingale has it.  Newness is not a new quality.  Ingenuity and inventiveness are central parts of life, human and non-human.  Stay loose, it says; don’t rigidify; accept that you have inherited from the past many beautiful and varied ways of being.   And once you know that, sing your song, which attends to the present, and is even a hymn to the present, to the long sense of possibility which has the past buried inside it.

Don’t believe it?  Go and listen to a nightingale – 2.5 minutes of untrammelled invention.  Or go for the full hour if your creativity is waning and you need a shot of nightingale song.