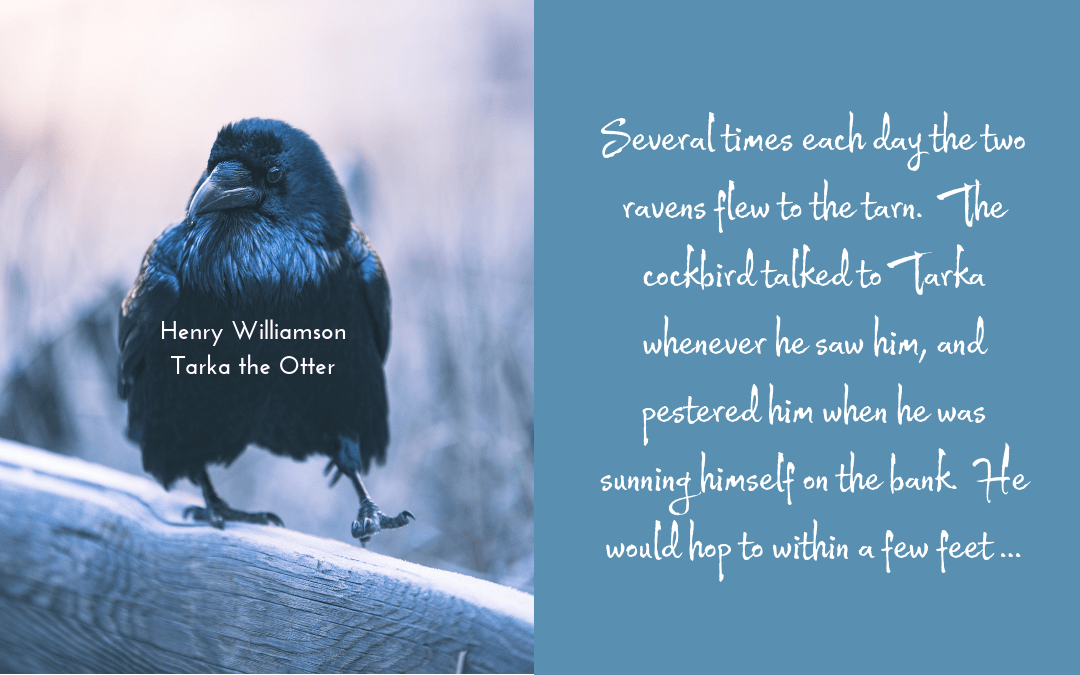 We play with dogs and cats and some other creatures.  I used to play with a fox in our garden in London: he made a show of taking my abandoned fleece delicately in his mouth and began pulling it off the table where I’d left it, all the while staring at me to see if I’d let him get away with it. When I told him to drop it, he did.

Another time, he began to nibble a solitary prize tulip as if preparing to bite its head off and when I told him not to even think about it, he sauntered off, pretending to look bored.

Best though was the hide and seek, where I would get closer and closer to him by keeping my gaze averted – it was then I noticed that it was a direct look that would alarm him rather than physical proximity.

So why was I surprised to read of playfulness between an otter and a raven?  The author of Tarka the Otter spent months observing their behaviour before writing his slim, beautiful tribute to them, cleaving to accuracy.  Playfulness is one of the strongest characteristics he highlighted: Tarka plays on his own, using old cans and splashing water spouts as toys, and he plays with his own kind.

Yet still, I was amazed to read of this joyous play beween an otter and a bird.

And the bonus information that the raven was likely ‘one of the three hundred sons of Kronk’.

Several times each day the two ravens flew to the tarn.  The cockbird talked to Tarka whenever he saw him, and pestered him when he was sunning himself on the bank.  He would hop to within a few feet of him with a frog in his beak, and drop it just windward of Tarka’s nose.  Once, when Tarka was playing with a frog and had turned his back on it for a moment, the raven picked it up and threw it to one side.  Bird and otter played together, but they never touched one another. The raven, who was one of the three hundred sons of Kronk, would drop a stick into the tarn and Tarka would swim after it, bringing it back to the bank and rolling with it between his paws.  Occasionally the raven slyly pinched his rudder, and Tarka would run at him, tissing through his teeth.  With flaps and hops the raven dodged him, flying up out of his way only when driven to water …

Unless he was tired after the nightly prowl, the kron-n-n-n-k of the zooming raven would always wake him, and he would either run along the bank or swim by the reeds to play with the bird.

For more on this slender masterpiece and this adorable animal, see the WritingRedux review.  Or another example of Tarka’s joyfulness.